As the world moves forward with technology, so do sports organizations. And one of the biggest changes sweeping through pro teams is the transition to Season Ticket Cards – replacing the long-used paper season ticket books. For the 2014-15 season, the Wild switched to this new concept and after many years of designing 40+ game season ticket books for the team, I welcomed this new challenge.

The biggest hurdle was coming up with a way to present the cards to our Season Ticket Holder accounts so that they still felt as though they are valued, and are receiving something special. Working with Carlson Print Group on a slide-apart box concept, I knew the design would have to be impactful.

Using elements such as the locker room doors, the State of Hockey anthem, some great photography, and our current branding, I was able to design a wrap-around piece sure to impress. Carlson Print Group added the final touches – a soft-touch cover with embossing on the Wild logo and gloss spot text on the interior anthem to really make it stand out.

From the Home Ice Advantage Cards, to the enclosed “User Guide,”  to the Season Ticket Holder pin, this piece effectively presented a new technology with the excitement of a new season.

On April 23, 2015, this piece was awarded “Best of Show” at the PIM Star of Excellence Awards (Printing Industry Midwest). The following is the message I received from my contact at Carlson Print Group:

A few weeks ago I had told you that the Wild slider season ticket box we helped you produce won the top honor in the category of “special coatings.”

Last Thursday night they had the annual PIM ( Printing Industry Midwest ) Star of Excellence Awards Banquet – which is really a big deal for printers.

The great news I have to tell you is that that same project took the top honor of the night as “Best in Show” which is the highest  honor anyone can get at that show…The best way to describe it is referring to the oh so popular Westminster Dog Show in New York. So here it is – your project won the “best beagle” category in the whole show, and at the end of the show they pick the winners from all the top breeds and award a Grand Champion — and guess who that was??  🙂

Congratulations! The Wild slider season ticket box was the top pick, Grand Champion, in the tri-state area (MN, SD, ND, Iowa, Ohio, Wis ) and because it won this it qualifies to be entered in the national competition.

I do have a couple of awards for you and when you open the attachment you can see the great award they presented us with — and a standing  ovation from the other printers (sorry we get to keep that one). But I will  have something for you that is really cool to show off the great efforts you put in on this design. (We really do work great together don’t we?!)

I can hardly wait for the next challenge!

All my best,
Jim 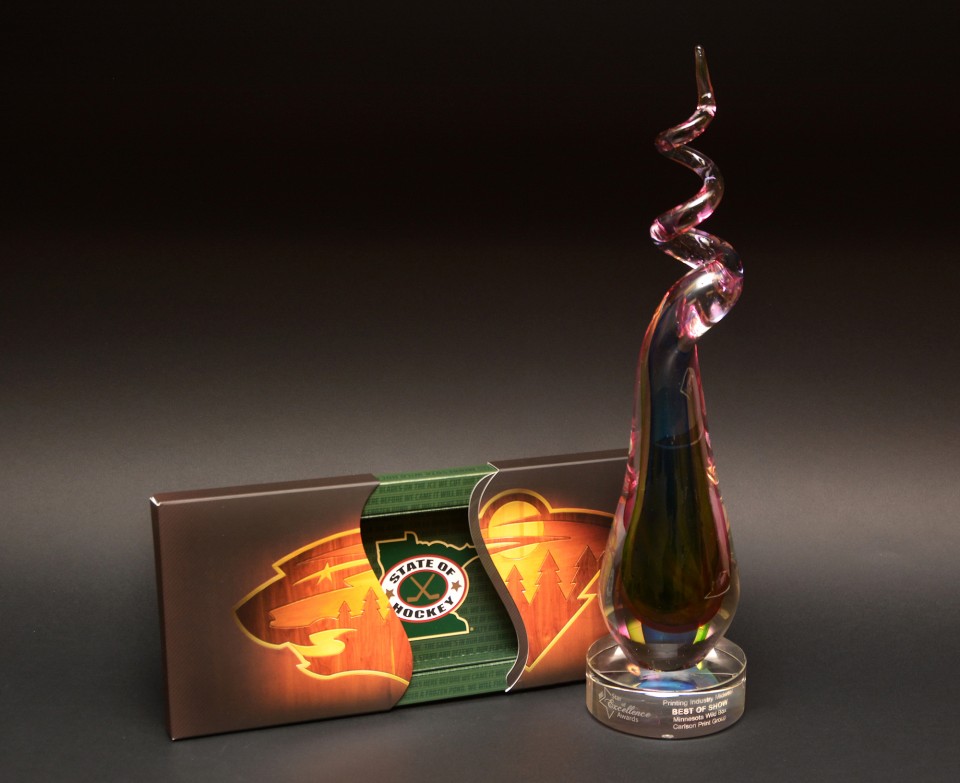